Home » Sewing » Sewing For Kids & Babies » Fleece Jacket: Flip this Pattern
I’ve been wanted to sew along with FancesSuzanne and the Flip this Pattern series for a few months now, the timing just didn’t work out. This month, the pattern was the Hangout Hoodie {which I happened to have!} and I had time to sew it up. So I did! I’m thrilled with how my vision came to life. {I’m also linking this up as my audition for Project Run and Play season 9}

Enter the Dear Santa $150 Amazon GIVEAWAY
and… need some fabric? Southern Fabric is having a Thanksgiving sale… be on the lookout for a giveaway coming soon too!

It was a rough start with my photoshoot… Poor guy wasn’t really up for it… but the sun was out for the first time in days and I really wanted to get this post up today!

He pulled it together after awhile.

I was actually leaning towards NO, but the response was overwhelming YES, so I sewed them on!
So I started with the hangout hoodie pattern.. I’ve sewed it up once before:

So, I knew what changes I wanted to make. This is not a full tutorial here, but here’s a few of the changes I made:
First, I planned to just put elastic at the wrists, so I cut the sleeves about an inch longer than the pattern.

The back piece and hood was cut normal, but the front had a few changes. I added length to the bottom and added just under an inch to the middle. Then, when it was cut out I cut down the edge, so instead of having one piece, the front is now two! 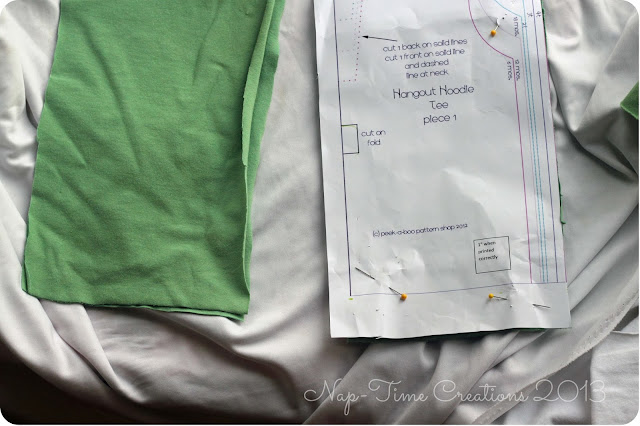 Here’s just a look at how its wider than the pattern.

It was also my first time doing an exposed zipper, it turned out great and I love the color! I wasn’t sure what to do with the zipper at the top, so I just added fleece tabs around the top of the zipper on both sides. I also fully lined the jacket to make it warm enough to actually wear for our {not very cold} winter. Fleece on the outside, knit inside, making it a little sticky to put on, but cozy once those little arms are actually in the sleeve. I used this tutorial from the Scrap Shoppe to add the scales to the back of the jacket. 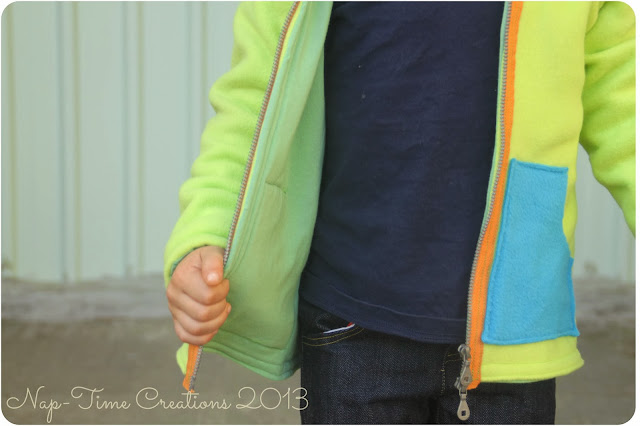 I am SO thrilled with the way it turned out!

Giving my five year old a chance to take a photo…

For other recent Sewing Projects see
Family Holiday outfits
Sewing Jeans {my first time! And…Max is wearing them in these photos too!}

This Post will be shared here: Block Party Group linky…,  I Should Be Mopping the Floor, Take a Look Tuesday-Sugar Bee Crafts,  Talent Show Tuesdays-Chef in Training, Sew Cute Tuesday: Better Off Thread *
VMG206:  Brag About It Tuesday,Kathe with an E: Transformed Tuesdays, Cast Party Wednesday-Lady Behind the Curtain, Inspiring Creativity-Twin Dragonfly Designs, Link it up party-Seven Alive, make it and wear it- The Train the Crazy , The Weekly Creative-The Girl Creative, The Party Bunch-Friday,  Link Party Palooza 7pm EST, Pinworthy Project Party-Just the Four of us, Shaken Together-What’s Shakin Friday, ,Freedom Fridays-My Turn {for us}, Get Schooled Saturday-Too Much Time on my hands ,Strut Your Stuff Saturday-Six Sisters Stuff, Or so She Says:  Your Great Idea Party, +other parties here