Home » Sewing » Sewing For Kids & Babies » Sew Many Books {Mark Twain}
I am SOOO excited to have Amy here from Sews n Bows she has been a huge supporter of my blog and I love all her super cute girly outfits… you know I don’t get to sew for girls very often… anyway… take it away Amy!!

For the Sew Many Books series, I chose to write about 2 books by Mark Twain. The Adventures of Tom Sawyer, and The Adventures of Huckleberry Finn. I read the books on my own around the 5th grade, and again as a class project in high school. Both times I was shocked and thrilled; and these books definitely shaped my interest in American History, Social Studies, and Literature. Reading them for the third time as an adult; I’m also very interested in the psychology of the author. What is it about the characters of Tom Sawyer and Huck Finn that have always resonated so strongly for me? The books were published in 1876 and 1884, and set in about the 1850s along the Missisippi River. 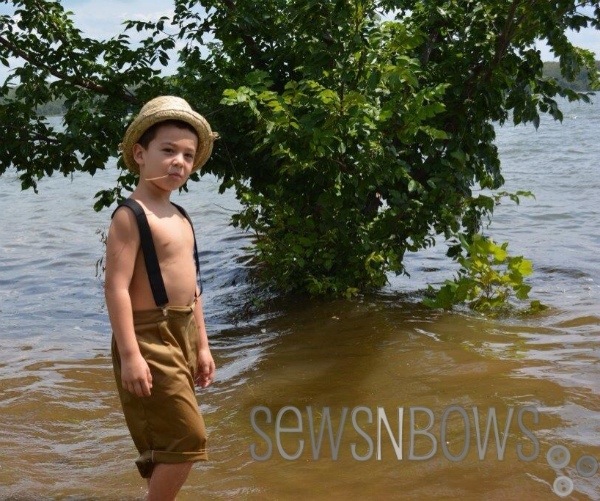 The Adventures of Huckleberry Finn is highly controversial, due to the use of racial slurs. One of the main characters and a hero in the book is Jim; a runaway slave. He is beloved by Huck, who has never had any parental love or guidance. Jim is portrayed as lovable and kind, but critics say he is also stereotyped as unintelligent, due to his gullibility and superstitious nature. As the story unfolds, one might consider that Mark Twain objected to racial injustices. He depicts heartbreaking realities that were common during slavery. Jim’s wife and children were separated from him; in fact, he ran away to avoid being “sold down the river”, further away from his loved ones. There are parallels between Jim and Huck’s characters, as Huck is also a runaway, escaping from his abusive father who had been keeping him prisoner. As the story unfolds, Huck Finn’s conscience is battling between the society he grew up in, and the beliefs it taught him; versus what is humanly right and just. The theme reoccurs throughout the book.

One of the things I love most about the books is their ability to capture the spirit and innocence of a child. As we grow into adults, we lose so much of our wonder for the world around us. That’s what I wanted to capture in these photos.

In some ways, the boys in these books seem much younger than their 13 years; despite the harsh world they lived in. Their pockets are full of “treasures”, such as pinch bugs, bits of string, or a broken knife handle. At one point, Tom trades Huck his freshly pulled tooth for a live tick. Respectable boys were expected to memorize Bible verses, which always perplexed Tom. He considered Huck the luckiest boy in the world for not having to suffer through school and church. Tom regularly played hooky from school, and opted to swim and go fishing with “Hucky” instead.

Shoes were not worn during the summer months, except to church on Sunday.

Huckleberry Finn wears the cast off clothing of full grown men. They are likely cut off or torn at the knee, and are “held up with only one suspender”. His straw hat is beat up, and he is described as “fluttering with rags”. My nephew Julian is playing Huck. For his outfit, I used Oliver+S Sketchbook Shorts. I made them bigger than his size, and left the bottoms un-hemmed.

Tom Sawyer owned 2 outfits; his “everyday” clothes, and his “other clothes” which were only worn on Sunday. Vain attempts were made by his aunt to keep him tidy and respectable. My nephew Evan is playing Tom, and he chose the Pier 49 Convertible Pants from Peek-A-Boo Patterns. I extended the length and sewed the cuffs down for this version.

I have been reading them bits and pieces of the book, and simplifying it for them due to heavy, antiquated southern antebellum language. It is a book meant for older readers, and there are parts I feel they should be shielded from for now. Nevertheless, it has opened up a lot of discussion about history and the differences between now and then.

No matter how much times have changed, I couldn’t help but observe how much the nature of boys is still the same. They still love to get dirty. They revel in open space, and love exploring. They still sulk when adults hinder their fun.

Tom & Huck played robbers, climbed trees, and even found hidden treasure. My nephews…well, they find adventures too. Today, they drove their bicycles down a hill and into the lake. Somehow, it seems to fit with the nature of their characters.

Hey, what are ya gonna do?! After all, boys will be boys!

I’ve focused more on the books than I did on the sewing for the Sew Many Books series because of the heavy subject matter within the pages. It’s unavoidable that one day our children will be forced to realize that the world isn’t a perfect place, and that there is ugliness in human history and society today. I sincerely hope that when that day comes, mine will understand that sometimes there is a difference between what is morally righteous and what is socially acceptable. If I do my job right, they will choose God’s love over man’s ideas, the way Tom Sawyer & Huck Finn chose friendship over what society’s beliefs.

“Just because you’re taught that something’s right and everyone believes it’s right, it don’t make it right.” ― Mark Twain, The Adventures of Huckleberry Finn

Most of all, I want them to seek out the beauty inside people, and in the world.